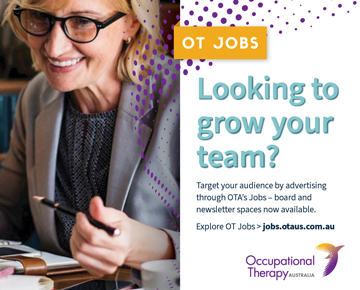 Pat was a member of the Executive committee for several decades and a good majority of that time was the President. Pat was equally determined about the needs and rights of the patient as that of how to progress and strengthen our profession. She was in fact client focussed well before this concept was defined.

She was both a strong and enthusiastic leader, challenging at times but encouraged you to “think big” if you were on the Executive committee with her; to aim high, not to give up and achieve as best as you could. Pat created the idea of bringing members together annually, to raise ideas and discuss/debate, then formulate the idea into a policy that would influence the directions of the Association. A Policy Manual was created to record all the policies and made available to members. Polices covered: Services to Members, Clients/Patients, Education, Employment/VAOT and AAOT Executive.

At the 8th Federal O.T. Conference (now know at the National Conference) in 1975, Pat gave a paper titled ‘Should We Go Federal’. Thus, demonstrating Pat’s ability to see the bigger picture for our association, given we only merged as one association (OTA) 10 years ago.

In mid 1970s Pat became the President of AAOT (this was the era when the Federal association moved every three years to a member state). During this time WFOT was considering holding the next WFOT council meeting in South Africa. AAOT did not support this motion (in support of the movement against apartheid) however at the WFOT council meeting, the Australian WFOT delegate did not follow the direction given to her by AAOT Australia. Pat instantly resigned as AAOT President. VAOT withdrew their membership and financial support to AAOT for 12 months in protest.

Pat and her family moved to northern NSW in the early part of 1980s where she combined her professional career with farming. Pat was awarded an Honoured member of VAOT at that time. She is remembered by her VAOT/AAOT colleagues with fondness and appreciation.

Pat was a lifetime honorary member after receiving the Lifetime Achievement Award. This award is granted to OTA members who have shown meritorious services in the field of occupational therapy while displaying exemplary contributions in support of the Association.

Her dedication to the occupational therapy profession and indeed the association is evident in her appointments, leadership and representation.

As an inaugural member of the National Association, Pat played a big part in the association as we see it today.